Are the 2020s a make or break decade for established financial institutions?

In this C-Suite Column, Edwin Abl, Chief Marketing Officer, looks to the new decade and ponders how fintech, big banks and the tech giants will fare.

As you’re reading this blog, you’ll already be aware of how technology is systematically disrupting financial services.

But how deep does this disruption run, and can established financial institutions adapt?

What is the real potential of the coming together of technology and finance to spark the fintech sector? Global analyst Gartner has, after all, suggested that by 2030 technology will transform the financial services sector so much so that 80% of established financial institutions are rendered irrelevant. 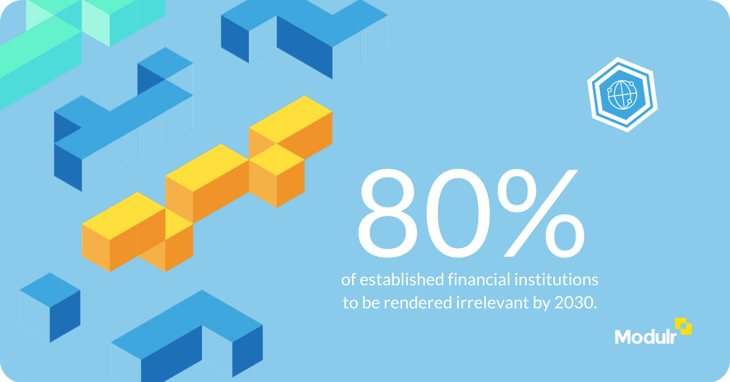 Just like the AI vs job loss debate, the truth lies somewhere in between. Here are three thoughts I have on the matter.

#1 Fintech and its disruptive effects are here to stay

In the last decade we’ve seen a whole host of changes in the financial services industry. In Europe, several challenger banks have established a foothold in business and consumer banking.  Across the world new models are also making inroads into the traditional financial services sector. Just like challenger banks, peer to peer lending is now taken for granted when the concept did not even exist a decade ago.

It’s an exponential rate of change than we’ve seen in decades prior, and it makes you wonder quite how different the landscape will be in a decade’s time.

You could argue that there are three core reasons to how FinTechs have become so disruptive:

Advancements in tech. We all know the buzzwords: AI, machine learning, blockchain and quantum computing and certainly, their potential is massive. Machine learning, especially deep language processing, is already impacting various industries, but the risk averse financial services is yet to see these new technologies' true potential.

Infrastructure and platforms. New types of infrastructure (cloud computing) alongside the increasing prevalence of API connectivity are leading to the creation of platforms. The result: these broad, pervasive and flexible technology platforms lower barriers to entry. Platforms also make it easier for companies to partner up and drive industry disintermediation, opening up the value chain.

Regulatory change. While the financial services are a highly scrutinised industry, regulation is steadily adjusting to open opportunities. Not only that, regulators are actively encouraging a more open, level playing field with initiatives such as Open Banking and PSD2. Again, I observe lower barriers to entry and possibilities.

These three drivers of change are leading to new business models and the ability to compete where, in the past, competing was not even an option. For traditional financial institutions it’s a twofold threat: increased competition but also disrupted business models.

To make matters even more difficult for established institutions, FinTechs are shifting consumer and business expectations as the Instant Economy – the underlying ultraconnected and automated infrastructure that makes the likes of Uber, Deliveroo and Revolut possible – becomes established. Traditional institutions need to adapt to Instant Economy expectations of access, transparency and speed or risk getting side-lined.

#2 The big banks fight back

We’re seeing leading tech conferences like the annual Web Summit in Lisbon increasingly dominated by fintech, but there is another side to the revolution which pits the new entrants against the deep pockets of the traditional banks. FinTechs have a real opportunity to steal customers from under big bank noses provided they can forge the right partnerships to ensure they are compliant, and their products operate smoothly. Disruption is easier said than done.

Firstly, the big banks are not standing still. The emergence of new players has prompted their own innovation programmes and often partnering up with tech firms to enact that change. Notably, as more mature infrastructural FinTechs - like Modulr’s support of Revolut - offers new FinTechs the same financial access and services as big banks. This allows new fintech brands to match traditional offering and go beyond consumer expectations.

Next, establishing credibility with consumers and businesses is not that easy. Nor is passing regulatory hurdles – even where these are now less of a stumbling block. Yes, it is easier than before to set up KYC and AML operations, especially with a partner. But it’s a challenge that other tech startups do not have to deal with.

Finally, FinTechs are facing a growing threat from tech firms with enormous war chests that have a proven ability to disrupt; just consider the recent developments around Uber Money. That said, infrastructural FinTechs willing to collaborate may find unique opportunities in partnering with big tech firms, as recently argued by our Chief Operating Officer, Martin Threakall, on The Economist.

It may be why Jane Turner in the New Statesman recently questioned whether we’d reached ‘peak fintech’ and that the opportunity now lay at the doors of ‘FinTechs 2.0’ who could “design solutions for the complex, multi-faceted arena of international business”.

While FinTechs are building the blocks to compete, traditional financial institutions have a short window to adapt. But, and through no fault of their own, keeping to short timeframes is not in their strong suit which has led to reactive strategies as the big banks try to replicate and ‘guess’ the latest trend in consumer and business banking.

For instance, It might take 18 months to pilot an app at a big bank, and only two months to launch a challenger app from a FinTech. It is that speed to market which is critical in capturing customers and that speed to market which is only achievable through partnerships. It’s why we’ve developed an industry leading API platform, enabling businesses to be up and running with payments in six weeks.

But where does that leave the big banks? Gartner suggests that the big banks can build or acquire their own digital ‘challenger’ platforms, choose to evolve into FinTechs or simply start acting as disintermediated service brokers.

While change is underfoot it does not necessarily mean that many of the big banks we know today will disappear in the next decade. However, those who do survive will have overcome institutional inertia and risk aversion. Or they’ll have found ways to partner with more nimble outfits.

Amazon Web Services (AWS) could provide a great example. AWS challenged the norm of the provision of servers and made it easy for others to innovate all while nurturing a global community of developers.  Perhaps the greatest turning point of the 2020s will be an AWS moment for an infrastructural FinTech.

Want to test out our API? Check out of sandbox below.

Modulr unlocks an easier, simpler and reliable service for...

What direct access to the Bank of England means, and why...

Get full access to our API and portal through our sandbox environment. So you can test drive the technology.

TALK TO AN EXPERT

Talk to our experts about how Modulr can help your business deliver a faster, easier and more reliable payment service.

We're happy to hear from you